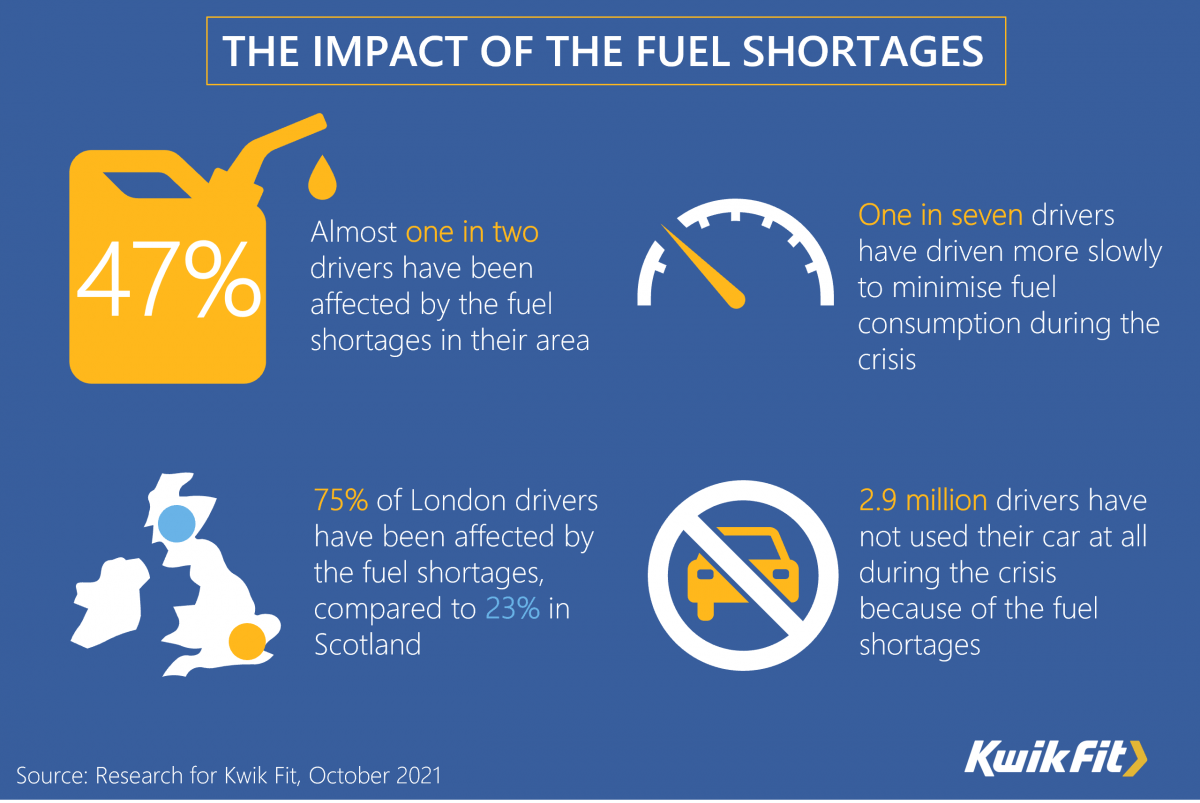 With the fuel shortage appearing to ease in most regions, and the situation back to normal in many locations – except in London and the South East – the latest figures highlight the impact to many drivers that have been affected since the crisis began.

Research released today by Kwik Fit, the UK’s leading automotive servicing and repair company, reveals that the fuel problems have had an impact on almost half (47%) of the nation’s drivers. The burden has fallen most heavily on the young, with 62% of drivers under 34 affected, compared to 38% of those over 55. The research found that across the country, 8.5 million drivers have decided not to make at least one car journey which they otherwise would have taken, while some 2.9 million motorists say they have not used their car at all because of the fuel shortage.

The figures reflect the reports of longer lasting problems in London and the South East. In the capital, 75% of drivers say they have been affected, followed by 61% in the East of England and 54% in the South East. In Scotland, the picture is the reverse of London’s – 77% of drivers say they have been unaffected by fuel shortages, and in the North East 71% of motorists have felt no impact.

Crucially, at this time of economic recovery, 1.7 million drivers have missed work because of the fuel problems. Away from work, more than one in ten (11%) of drivers have cancelled social plans because of the shortage, an understandable response to the crisis but one which will have had a significant knock on effect on the already hard hit hospitality sector.

The Kwik Fit research found that driven by necessity, many drivers have changed their behaviour. One in seven drivers (14%) say they have driven more slowly to minimise their fuel consumption, while 11% have replaced a car journey by travelling by bike or on foot. One in 12 (8%) say they have switched to public transport for a journey instead of using their car and around one in 25 (4%) have car shared on a journey they would have otherwise taken alone. (These figures drop to 6% and 3% respectively when excluding London.) These relatively low numbers will be concerning for those authorities aiming to encourage more people to opt for public transport or car share on a regular basis.

Roger Griggs, communications director at Kwik Fit, said: “There have been differences of opinion over the causes of the fuel supply problems and how they could have been avoided, but it’s clear from this research that there needs to be a robust plan for the longer term. With half of all drivers being impacted by local shortages it’s going to be unsustainable for people’s work, family and social lives if these issues are repeated.”